Our mission is to work together with counties, cities, and communities, as well as our public, private, faith, and educational partners to make California a healthy, vibrant, inclusive place to live, play, work, and learn.

The California Health & Human Services Agency is comprised of six distinct offices that collectively make up the Office of the Secretary:

The office manages the ongoing public information and public affairs functions and provides guidance and direction to public information officers in CalHHS departments. In addition, the office serves as the official Agency spokesperson to respond to media inquiries, and coordinates with the Governor’s Office communication staff on significant and sensitive media issues.

Office of the Agency General Counsel

Office of Program and Fiscal Affairs

The office is responsible for formulating, analyzing, revising, and evaluating the program and fiscal impacts of major health and human services policies of the Administration. This includes assessment of all policy, legislative, fiscal, and other issues that have implications, not only among CalHHS departments, but beyond CalHHS to other state agencies within the Executive Branch.

The CalHHS Office of the Secretary serves a critical coordination role on all assignments and projects as directed by the Governor’s Office and control agencies. This unit handles all personnel, HR, training, and internal budget issues.

Office of the Agency Information Officer

The Office of the Agency Information Officer (OAIO) supports our departments’ efforts to enhance their programs through their successful delivery of data and technology solutions. Through Portfolio Support, Enterprise Architecture, Information Security, Agency Governance and Horizontal Integration activities, the OAIO provides both operational and strategic services to increase the probability of successful projects while promoting a person-centered culture and a corresponding portfolio of interoperable systems that can share and use data effectively to provide wholistic services to Californians in need.

The Office of Policy and Strategic Planning is responsible for driving measurable outcomes on CalHHS’s guiding principles and strategic priorities through system alignment and program integration across the agency’s departments and offices to build a Healthy California for All. The Office works on a set of initiatives to advance equity, address the social determinants of health, and ensure a whole person approach.

The Secretary of the California Health & Human Services Agency sits on a number of committees and advisory boards, and is directed by Executive Order to establish a number of advisory bodies: 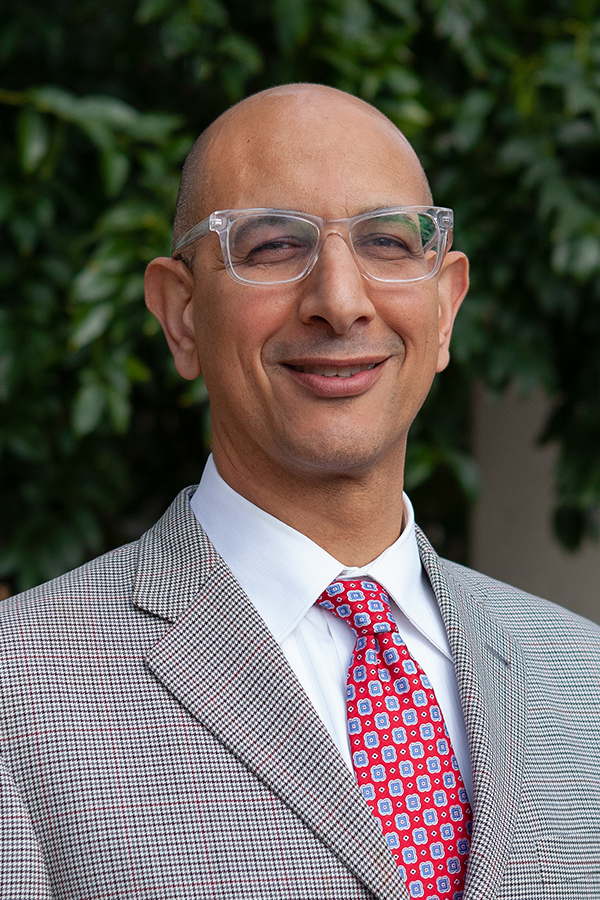 In serving California, Dr. Ghaly has the privilege of working with partners across sectors and disciplines to improve the lives and life chances of ALL Californians. This has been especially true during our response to the COVID-19 pandemic.

Dr. Ghaly is a primary care pediatrician who continues to use his clinical and community experiences, working in California’s health care safety net system, to inform a whole person, whole community, approach to integrating services so they are equity-anchored and person-centered for ALL, but especially the most vulnerable Californians.

Dr. Ghaly holds the deep belief that together our collective efforts can not only serve Californians well today but set us on a path where ALL Californians have a brighter and healthier future.

Nothing he does can be done well without the support of his wife, Dr. Christina Ghaly, and his 4 young children.

Marko Mijic serves as the Undersecretary at the California Health & Human Services Agency. In this role, Marko oversees 12 departments and five offices, which includes over 34,000 employees and a total annual budget of approximately $200 billion.

As Undersecretary, Marko leads all policy development and implementation, and manages the day-to-day operations of the Agency. He is focused on streamlining government and improving operational efficiency; expanding access to health and human services; building an equitable recovery from the pandemic; integrating health, behavioral health and social services to promote whole-person care; and improving the delivery of services for older Californians and people with disabilities.

Prior to being appointed as the Undersecretary by Governor Gavin Newsom, Marko served as Deputy Secretary for Program and Fiscal Affairs since 2019 and as Assistant Secretary since 2015. Marko also served as Acting Director of the California Office of Statewide Health Planning and Development from 2020 to 2021.

Prior to joining the California Health and Human Services Agency, Marko worked at the American Heart Association and the U.S. Department of Health and Human Services in Washington, DC. He earned his Bachelor of Science degree from the University of Utah in Salt Lake City, Utah and his Master of Public Policy degree from the American University School of Public Affairs in Washington, DC.

Samantha Lui serves as Deputy Secretary in the Office of Legislative Affairs at the California Health & Human Services Agency.

Previously, Lui was the Principal Consultant to the California State Senate, Committee on Appropriations since 2018, and from 2016 to 2018, she served as Assistant Secretary at CalHHS.

Gallegos has been Senior Public Information Officer for the California Department of Public Health COVID-19 Vaccine Task Force since 2021. She was Communications Director for Assemblywoman Lorena Gonzalez from 2018 to 2021, Direct Mail Manager for the Assembly Democrats in 2018 and 2020 and Creative Content Producer for the Democratic Office of Communications and Outreach from 2017 to 2018. Gallegos was a Digital Producer for ABC10 from 2015 to 2017 and Reporter and Social Media Manager for Capitol Weekly from 2013 to 2015.

From 2016 to 2020, Goldman served as deputy director and chief counsel at the Department of Health Care Services. Previously, from 2012 to 2016, Goldman was a partner in the health care practice group of the law firm Best, Best and Krieger LLP. He also served in several positions at the California Prison Health Care Receivership from 2006 to 2012, including chief counsel and staff counsel. Goldman was a deputy county counsel at the County of Santa Clara, Office of the County Counsel, from 2001 to 2006, representing the county’s health and hospital system.

Brendan McCarthy serves as Deputy Secretary for Program and Fiscal Affairs at the California Health and Human Services Agency.

Sonia Fernandez–Herrera serves as Deputy Secretary of Administrative Services at the California Health & Human Services Agency, where she has served since 2011.

Adam Dondro serves as the Deputy Secretary for Information Technology and Agency Information Officer at the California Health & Human Services Agency where he has served in both positions since 2017. He brings with him a passion for government, service, and a focus on whole person care.

Prior to this role, Adam spent five years as the Assistant Director of Horizontal Integration at the Department of Social Services. In both these roles, Adam has focused on integrating Health and Human Service programs to provide the best overall experience and outcomes for our constituents, and on the power of data to improve program and policy decisions. Previously Adam held multiple roles across CA government including five years in the State Legislature and four gubernatorial appointments.

He is supported and inspired by his amazing wife and two daughters. In his free time he enjoys playing soccer, coaching, and just about anything outdoors and away from a computer.

Corrin Buchanan serves as the Deputy Secretary for Policy and Strategic Planning at the California Health & Human Services Agency.

Corrin has spent most of her career in systems change work in state and local government. Prior to joining CalHHS, Corrin served at the Assistant Director of Housing and Homelessness for the California Department of Social Services. She worked for the Los Angeles County Department of Health Services as the Deputy Director for the Office of Diversion and Reentry where she oversaw countywide behavioral health diversion, reentry, and youth diversion and development efforts. Also with Los Angeles County Department of Health Services, she launched and managed the Flexible Housing Subsidy Pool, a locally funded rental subsidy program with the Housing for Health division. Corrin was Health Program Planner for Housing and Urban Health at the San Francisco Department of Public Health and the Community Programs Director for the San Francisco Women’s Building. Corrin holds a Bachelor’s degree and a Master’s degree in Public Policy from UC Berkeley.

Welch previously served as Executive Officer for the Council on Criminal Justice and Behavioral Health since 2015. Welch was the Senior Program Manager for the California Mental Health Services Authority from 2011 to 2015, an Associate Policy Director at the County Behavioral Health Directors Association from 2007 to 2011, and the Associate Director of Public Policy at the Council of Community Behavioral Health Agencies from 2000 to 2005. Welch earned a BA in Social Work from University of California at Davis and a Master’s Degree in Social Work from the University of Southern California.

Melissa’s career in health policy is grounded in deep dedication to the vision of improving health, well-being and opportunity for all Californians to thrive and fully reach their potential, particularly those who are the most underserved and face the most structural barriers to opportunity. As Director of the Children and Youth Behavioral Health Initiative, Melissa is working with CalHHS departments, sister state agencies and with partners and stakeholders throughout the state to reimagine California’s children and youth behavioral health system into an innovative, up-stream focused, ecosystem where ALL children and youth are routinely screened, supported, and served for emerging and existing behavioral health (mental health and substance use) needs.

Prior to her appointment to CalHHS by Governor Newsom in Fall 2021, Melissa was Executive Director of the First 5 Association of California leading the development and implementation of the organization’s strategies to advance a whole child, whole family, equity-centered early childhood policy and systems change agenda. She served as Regional Director for the U.S. Department of Health and Human Services Region IX from 2014-2017 under the Obama administration and worked in partnership with local and state organizations, key stakeholders and elected officials in communities throughout the region to implement the Affordable Care Act, increase access to health care and social services, and improve the lives and health of diverse communities. Melissa previously was President & CEO of the California Association of Public Hospitals and Health Systems leading the organization’s strategy to advance public policies that support the essential role of the safety net and improve health status and access to care for low-income and uninsured individuals and communities. In addition to her experience in public and health policy, she also worked in philanthropy, serving as Executive Director of the Dean & Margaret Lesher Foundation.

Melissa holds a Masters degree in Public Health from the University of California at Berkeley and a Bachelors of Science in Biology from Saint Mary’s College of California.